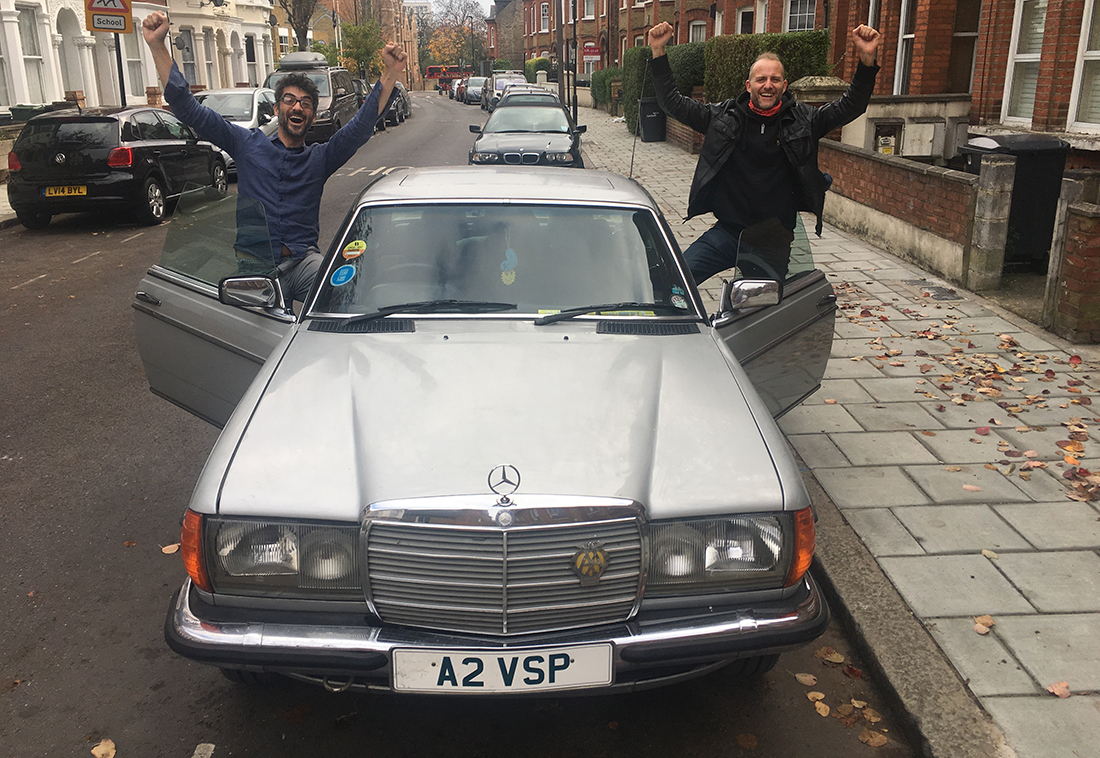 Robin Twelftree and Giles Golding have set off in Giles’s vintage Mercedes to drive the 4000 miles from London to Gunjur in The Gambia. They hope to raise at least £3000 for Marlborough Brandt Group through sponsorship, the auction of the Mercedes and donated musical instruments.

They also intend to release an album of the music recorded on the trip with musicians in France, Spain, Morocco, Senegal, and The Gambia. Proceeds from the sale of the album will also go to Marlborough Brandt Group.

Robin explained how the trip came about. “In 1987 Giles and I were both wide-eyed 16 year old students at school in Marlborough.  I attended St. John’s and Giles was at Marlborough College.  Thanks to the Marlborough Brandt Group (MBG) we were lucky enough to go on a life-changing cultural exchange to Gunjur in The Gambia, and experience a totally different life in a West African village, living and working with local families over the course of a year.

The eye-opening experience forged a strong affinity with the people, music and art of Gunjur, and a lasting friendship between us.”

“Nearly 30 years later we’re attempting to drive 4000 miles south, across the Sahara, in Giles’s vintage Mercedes.  We want to celebrate the restoration of democracy in The Gambia and to raise some cash for the MBG charity, make music, and reunite with our old friends in Gunjur again, for the mother of all parties!  The trip is entirely self-funded, so every penny raised will go directly to the MBG.”

The Mercedes, named the Gambian Disco Express, has had a sound system installed by ‘Richie Famous’ in a Brixton car park.  En route in Barcelona, disco lights will be added !

From Barcelona they travel south via Seville to take the ferry near Gibraltar across to Tangiers, then to Morocco and through the Sahara to Mauritania and Senegal.

After stopping off in Dakar to record local musicians they will reach The Gambia, and after visiting Banjul, the capital, will arrive at the coastal village Gunjur on December 6th.

The Marlborough Brandt Group, which has been running for 35 years, developed the link between Marlborough and The Gambia.  It now supports organisations to deliver development and education programmes in Gunjur as well as working in the UK to educate and provide the opportunity for people in the Marlborough area to travel to and experience life in Gunjur.

Like Robin and Giles, sixth form volunteers from St John’s Marlborough and Marlborough College have supported many of these programmes alongside young people in the Gunjur community through the construction of, for example, a five classroom block for the primary school, the TARUD pre-school, a fence around a 12 acre vegetable garden, a skills training centre, the renovation of a classroom block in the Islamic School and most recently the construction of a central market place to enable women to sell their vegetables, fish and meat sheltered from the sun and rain.

Robin and Giles will be sharing the experiences of their journey on a Facebook page.

Donations can be made at this link.

Small Business Saturday 2017 – an opportunity for businesses in and around the Pewsey Vale
Next Post: Popular television wildlife star Steve Backshall plants an apple tree for Burbage Primary School