David Mepham, the director for Britain of the international organisation Human Rights Watch (HRW), insisted in the thirty-second annual Brandt Lecture (March 12) that the only fair and successful development policy is one that respects human rights.

He told the audience at the Theatre on the Hill, St John’s Academy, that many people – among them women, children, the disabled and ethnic minorities – will miss out on the fruits of development if policies do not go hand in hand with respect for human rights.

And worse, many will be physically harmed – as they are being now.The lecture was introduced by Lilli Loveday who was head girl at St John’s in 2003-2004, has been on three exchanges to Gunjur in The Gambia and for two years worked in human rights in The Gambia.

In the chair for the lecture was Lord (Frank) Judd who is a patron of the Marlborough Brandt Group which organises the lectures.

In 1982 he was the first Lent lecturer and has been an MP, government minister and director of VSO and Oxfam.  He is now a very active life peer.

David Mepham argued that the lack of inclusion of human rights in the Millennium Development Goals (MDG) had reduced their impact – and left significant numbers excluded from the benefits the Goals had brought.  The MDGs lapse in 2015.

He identified three kinds of development where human rights in the broadest sense were needed – unsustainable, unequal and abusive development.  And he gave examples from around the world – from China to Ethiopia – where development had, for want of attention to human rights, been ‘abusive’. 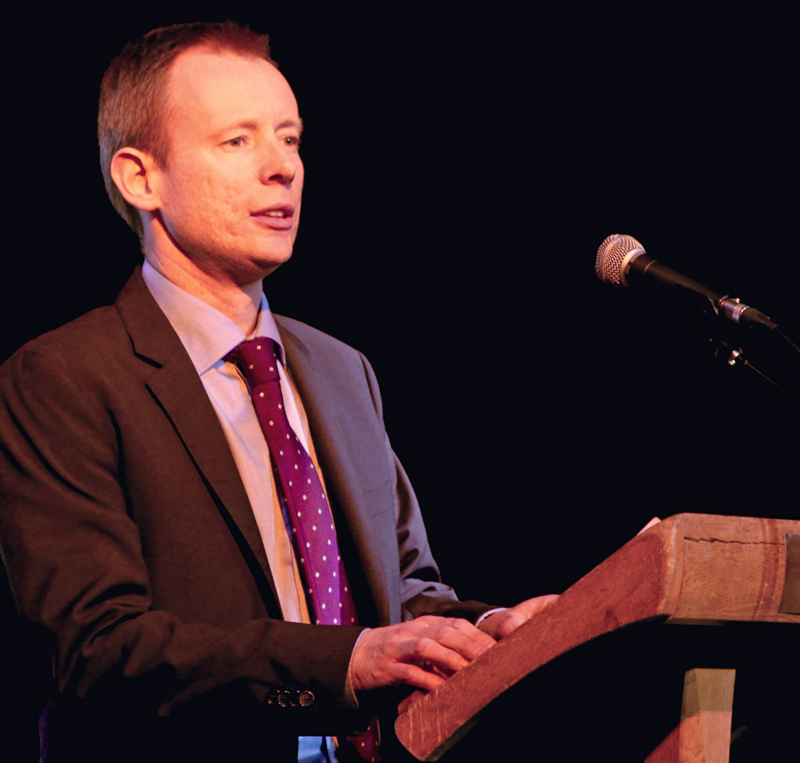 David Mephan criticised the World Bank and Britain’s Department for International Development (for whom he once worked) for shying away from supporting democratic and social reform and from empowering the people who needed development the most.

“Development should be reframed more broadly and not just be about higher incomes…freedom from fear as well as freedom from want.”

He did not want the audience to go away depressed by his analysis and his examples.  The meetings to set new, post-2015 goals were positive: “The compelling case for human rights is at last being heard.”

More generally: “We see lots of evidence of things improving.”  He cited the amazing generational changes in Latin America and the 2011 convention to protect the rights of domestic workers – 50 million of them.  He noted Britain had not yet signed this convention.

David Mepham had to admit to the Gambians in his audience that HRW does not work in The Gambia. There are anxieties that the government of President Jammeh is increasingly flouting human rights and there was a heartfelt plea for HRW to start working in Gambia – or at least to begin working from neighbouring Senegal.

He did reassure a questioner that HRW was watching human rights in Britain.  They had been active on terrorism related issues and will soon publish a report on the treatment of migrant domestic workers in the United Kingdom.

Perhaps the final word should go to Lord Judd who, in his introductory remarks, praised the Marlborough Brandt Group’s ‘amazing story’: “As I reflect on life, I realise that what is absolutely crucial is a recognition of our interdependence.”

Time to see for the first time the design of Marlborough’s new 18 carat gold Mayoral chain
Next Post: Joan Collins is more glamorous at 80 than I will ever be says Tory MP Claire Perry »