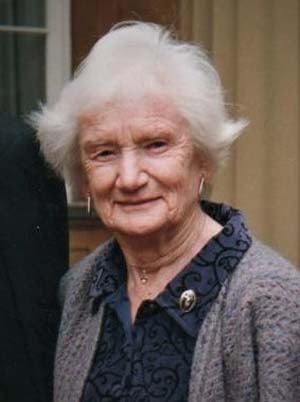 Christine Spray spent the greater part of her life living in Marlborough with husband Bill, raising a family and leaving finally only in 2006, moving to Oxford, where she died – peacefully at home – last month, aged 95.
Born in Grimsby in May 1924, the youngest of three sisters, Christine grew up surrounded by Methodism, music and – one suspects – much fun!

Leaving Grimsby’s Wintringham Grammar school, Christine attended Bedford College in London, but on the outbreak of war was evacuated to Cambridge to complete her studies.  It was there at the Wesley Methodist chapel that she met Bill, then a student at Peterhouse, and they got married there in August 1948.

Between 1944 and 1948 she worked in the Medical Research Ccouncil’s Department of experimental medicine in Cambridge, becoming a small part of the world-famous team of nutrition scientists led by Professors McCance and Widdowson. Some of the research papers Christine co-authored on digestibility of wheat, on white and brown bread, and on the chemical composition of the human body are still standard texts.

And as anyone who came to eat at their home in Marlborough will know, Christine’s cookery skills were much admired.

Christine and Bill moved to Marlborough in 1948 when Bill got a job teaching history at Marlborough College and from then on life in and around Marlborough was the focus of her activities. It was temporarily exchanged for nearly five years spent in Nigeria supporting Bill in his role as Head of a Methodist Teacher Training College, and home schooling two young sons, Paul and Christopher.

She returned initially to Mildenhall, then to Marlborough in 1958 with the birth of daughter Rachel.

Throughout the next dozen years, Christine continued her love of music, often playing her violin or viola in quartets at home, or with the North Wilts Orchestra. As a housemaster’s wife, she was also an expert and kindly host to visitors from near and far, and of course a busy mother looking after three rapidly growing children.

In 1970, they moved to Leighton Park in Reading when Bill took over as head of a Quaker school – a job that again required Christine to act not only as host, but as a welcoming figure and friend to other staff wives and partners.

More music, more dancing and the occasional party enlivened life, alongside the chance to nip up to London to listen to orchestras and attend plays.

In 1980, Christine and Bill moved back to Manton Hollow, where they lived on the edge of the Marlborough Downs and again threw themselves in to local parish and community activities, as well as enjoying visits from their eight grandchildren.

Only in 2006 did they finally leave Marlborough, moving to Oxford to be close to their eldest son Paul and to thoroughly enjoy the cultural and social activities on offer.

They celebrated their diamond wedding in 2008, with Bill predeceasing her in 2012.