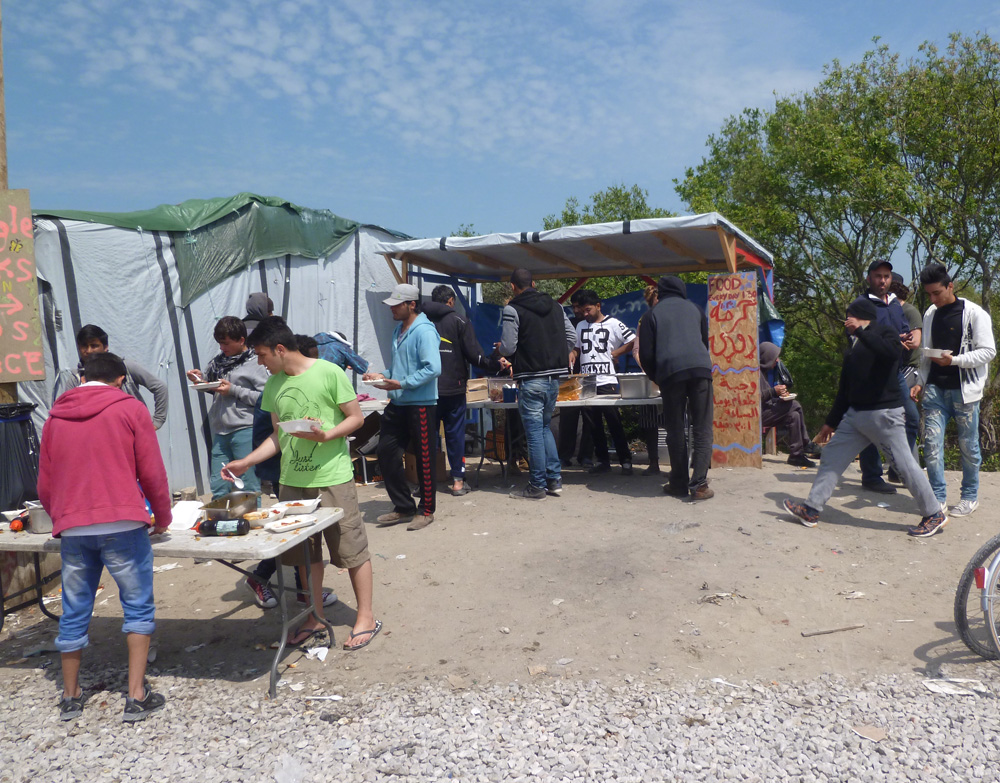 Almost a week has passed working as a doctor with the refugees and asylum seekers in the Calais ‘Jungle’ and it is time for reflection.

Here is a population of maybe 2-3,000 people (a census is impossible under these conditions) who should be classified as refugees – fleeing from conflict in Syria, Iraq or Afghanistan, as asylum seekers – fleeing political oppression as in Sudan or Eritrea, or as economic migrants – hoping for a better life in Europe.

In talking to individuals amongst the migrants who present at my caravan with what can only be described as ‘superficial and trivial’ medical complaints – whether cough, chest pain, itching, pain all over the body, heart burn or a minor trauma to an ankle, for which, on examination, no outward sign can be found – it is clear that they need an opportunity to talk to someone they perhaps see as a father figure.

They want to unburden themselves of the traumas that they have been through and the uncertainty of their futures. And that is more important than any placebo that I might prescribe whether, paracetamol, Rennes, Vick or a skin lubricant. It is also clear that a bandage, strapping or plaster is crucial in order to demonstrate to the outside world that they have seen the doctor and their condition is considered serious!

Am I playing games, I wonder? Or am I recognising that these are people who, by an accident of birth, have been through the unimaginable traumas of war and political oppression. They have have taken indescribably risky journeys only to find themselves in a state of limbo with a totally uncertain future. Among them are people who have made as many as 20 attempts in the past three months to board a truck to get to UK.

And yes! England is the only destination in which they are interested. If there is one thing in which they are united it is that at the moment, and for the foreseeable future, returning home is simply not an option.

So why England? Because English is the global language which they may speak to a greater or lesser extent. They also have the perception that we are a nation that historically welcomes refugees and asylum seekers and they know that there will be compatriots at least and family members at most, living in the UK who will nurture them on arrival.

In listening to the stories I am aware that these people are exceptional. By definition they are exceptional. None of us has been through the desperate experiences that they have witnessed and during the course of which they have lost husbands and wives, parents and children. Few of us have uprooted ourselves from everything that is familiar and taken the journey into the complete unknown.

I ask many of them as they sit on the small examination couch in my very small caravan/surgery: “If David Cameron were to be sitting next to you, what would you be saying to him?” To a person they say “I would be saying ‘Let us in to the UK! We want to make a contribution to your country. We have the skills and the commitment’.”

My personal reflection is that at the very least the French, who consider the ‘Jungle’ camp to be an illegal settlement and the British who appear simply to want to ignore the situation and wish it would ‘go away’, should be sitting together in recognition that this is a situation that is totally inhumane and cannot continue and solutions have to be reached.

Is the twenty-first century the one in which we shall all be branded as the uncaring generation who ‘passed by on the other side’?

As Referendum Day gets closer campaigning and debates have suddenly got going in the Marlborough area
Next Post: Dr Nick in Calais: Day Six – Mustapha’s story